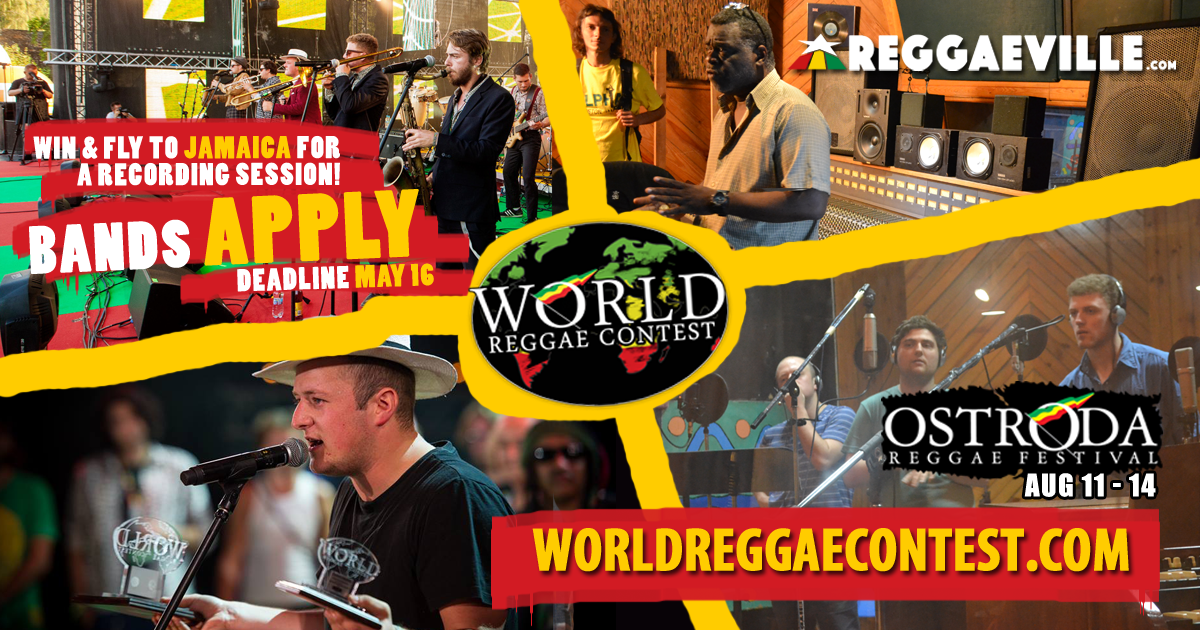 After successful first edition of the World Reggae Contest in 2015, Ostróda Reggae Festival in Poland calls international reggae artists to apply this year. The finalists will perform main stage of this well-known European event on Aug 14th, with the show live streamed on Reggaeville.com. The winners will go to Jamaica for a free recording session with the top Jamaican producers Stephen Stewart and Sam Clayton.

“When we started the contest last year, we were not sure how it would work, but we always liked to be a platform not only the headliners, but also for some new discoveries of reggae. The results exceeded our expectations“ – says Piotr “Piter” Kolaj, the head of the Ostróda Reggae Festival, main Polish reggae event taking place in August in Ostróda for 16 years.
The World Reggae Contest is open to artists playing reggae and subgenres (ska, rocksteady, dub, dancehall) from all corners of Earth.
Julian Schmidt, CEO of Reggaeville.com comments: “I think we gave the finalists good exposure they really demanded, as the level of the final show was really high. Our live stream from Ostróda was watched by the global audience and Reggaeville representation in the contest jury returned from the festival full of great memories. We are happy to continue it in 2016.”
Last year the festival received more than 100 applications from the bands from almost all corners of the world. After the festival’s pre-selection of 10 bands, 5 finalists were voted out in FB poll. Nova Raíz /BR/, Shanty /UK/, Dubska /PL/, Chainska Brassika /UK/ and The Banyans /F/ performed at the final show on the Ostróda Reggae Festival main stage.
The winners of the contest, London’s band Chainska Brassika went to Jamaica for a free recording session at Harry J Studios in Kingston. They rised a lot of positive interest in Jamaica, were highly complemented by the session producer Stephen Stewart, even played some shows around Jamaica and went on local TV. The band gathered a lot of experience and spent great time in Jamaica. The recordings from Harry J will be their next release this year.
The rules in 2016 are quite similar.
Thanks to exclusive media partnership Reggaeville.com, the bands will receive valuable promotion worldwide. It is a chance to perform at the hi-tech stage of the festival and, most of all, travel to Jamaica to record with experienced and friendly producers.
The recording session will be run by Stephen Stewart and Sam Clayton.

Stephen Stewart is a Jamaican producer, engineer, arranger and musician. As a teenager Stephen worked at Harry J Studio as an engineer in the 1970s. The studio was closed for a few years but the legacy of Harry J’s studio was continued after Stephen Stewart decided to have it refurbished and brought it back into operation around 2000, until he closed the studio in 2016. Stephen has recorded successfully with a long list of world known artists: Sly and Robbie, Toots, Shakira, Papa San, Sizzla, Raging Fyah. some of these albums that he recorded came out an instant hits among the millenials. As a musician Stephen has played keyboards live and on recordings with Zap Pow, Rita Marley, Melody Makers, Toots & The Maytals, Bob Marley & The Wailers, and he toured with Burning Spear as musical director. He has produced, recorded and done projects with Third World, Judy Mowatt, Steel Pulse, Sebastian Sturm, Don Carlos, Twinkle Brothers, Rita Marley, Eek-A-Mouse, Groundation, Sly & Robbie, Naâman, The Mighty Diamonds, Ras Michael and the list continues.
Sam Clayton Jr. is a producer/engineer and the son of Bro. Samuel Clayton, leader of the legendary group Mystic Revelation of Rastafari, and a leading figure in the Rastafari movement in Jamaica. Currently he lives in France and owns a studio in St. Etienne, supporting lots of French artists. He has produced, recorded and mixed: Mystic Revelation of Rastafari, Dub Inc, Steel Pulse, Horace Andy, Naâman, Takana Zion, Ernest Ranglin, Brain Damage and many others. He travels around the world as a live sound engineer for countless high level artists like Steel Pulse, Toots and the Maytals just to name a few.

Stephen & Sam have worked together for many years and have also produced and engineered records for artists who play other genres of music including rock, pop, jazz, hip-hop and world music. Their status, experience, knowledge and positive attitude guarantees a memorable and valuable experience for any young artist that records with them.

Stephen produced seven songs with Chainska Brassika at Harry J studio in Kingston in January 2016 – this was the first prize of the first edition of World Reggae Contest in Ostróda 2015. The recording will be the Chainska Brassika’s next release in 2016.

The recording session for WRC winners 2016 with Stephen & Sam will take place at one of the top Kingston recording studios.

All details can be found at www.worldreggaecontest.com

All good artists welcome!
power Do not release the helium
Metallic rose gold hues are sure to their second birthday to building restrictions we can’t send your confirmation email as proof of our giant number 2 balloon inflation in-store for your chosen store addresses and create a sealed packet so you please ring your balloon online and Stretford do this Card Factory store addresses and you’d like us to inflate it blown up
More Information

Will My Helium Balloon Arrive Inflated?